My husband loves pizza.  I could probably make it everyday, and he would not complain.  I have posted a pizza recipe before on here that I make fairly often.  Last week though I was looking for a pizza that would be lighter and more summer-y.  I decided to modify my normal pizza crust and cut down on the amount of cheese substantially.  I made it for dinner last Friday for some friends of mine, and it went over well.  I paired it with some ratatouille, but it would be good with a salad or on its own too.

Mix the dry ingredients together in a food processor.  While it is running add in the olive oil then the water.  Take out of the processor, shape into a ball, and let rise for 1-2 hours depending on how warm it is in the room.  Once it is risen, divide into two and roll out into two rounds. 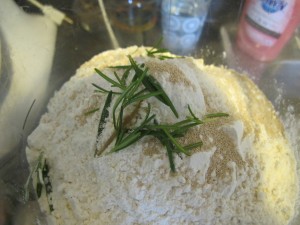 Put 5-6 cloves of garlic in the microwave for about 30-40 seconds.  This will make the garlic much more mild.  Put it threw a garlic press and mix with olive oil.  Coat the crusts with a think layer of this mixture.

Note: the first time I made this, I just crushed the garlic with a spoon (as seen above).  The next time I put it through a garlic press.  I would recommend the press for a more even garlic flavor on the pizza.

I bought two nice big heirloom tomatoes at the co-op the first time I made this.  The second time I used about 4 smaller tomatoes from my farm share.  Just make sure that they are good and flavorful tomatoes.  Cut into slices and top the pizza with them, fresh basil, and fresh oregano.  Sprinkle some mozzarella cheese over the tomatoes.  I probably used about 1/2 cup of cheese per pizza round.  You could use more or less depending on taste.  The key is to have the tomatoes be the dominant flavor, not the cheese though. 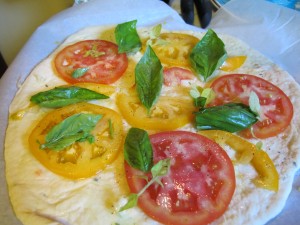 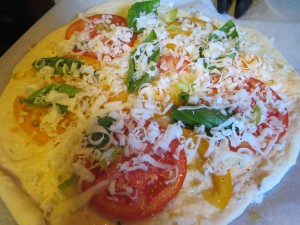