After about a month of not posting too much, I am back.  I finished up the most difficult quarter of school I have ever had.  Yesterday I graduated, though I still have a couple of things left to do until I actually get my diploma in the mail. I am feeling pretty good.  I will be back posting regularly now, so get ready for some fun new recipes and such.

Yesterday after my graduation, my parents hosted a lovely dinner for me, my family, and my in-laws.  It was delicious.  I made a blueberry pie to bring down and below is the recipe.  The filling is from Dorie Greenspan, with a couple small adjustments.  I used my basic pie crust because I like butter crusts much better than shortening crusts, which was what she suggested.  I don’t think I had ever had a homemade blueberry pie before.  They are so much better than store bought ones or frozen ones.  The pie was a big hit with everyone (except my mom, but she doesn’t like blueberries–I brought down a raspberry bundt cake too, which I will probably post about later, which she liked a lot).

Use can use any double pie dough recipe really.  I used the one that is on my basic recipes tab.  You could even use a pre-made crust if you want–this recipe would be really easy then.   Roll the dough out and keep in the fridge until ready to put the pie together.

2 pints of blueberries, washed and make sure the stems are removed

Mix everything together in a bowl except for the bread crumbs and let it sit for 5-10 minutes. 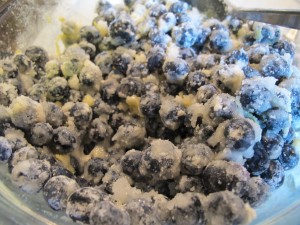 Put the top crust on this.  Make a few slits in the top.

Pain the top of the pie with an egg wash.

Let the pie cool at least a half an hour before serving.

@matsondaley saw this on you feed and had to try it! Oh the quarantine life. #dalgonacoffee