Alec and I split an organic farm share with our friends Anna and Chris.  We love it! However, sometimes we end up with a lot of vegetable we aren’t sure what to do with.  I like cauliflower, but I don’t love it, and I had a lot of it.  Thus this soup.  To be honest, I did not have high hopes, but I liked it a lot.

Cut the cauliflower, shallots, onions, and garlic.  Toss in olive oil and bake at 350 for about a half and hour or until the vegetables start to brown.  They will smell great. 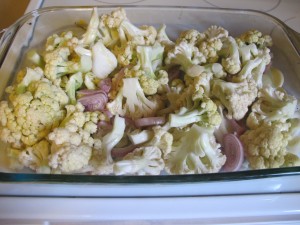 The above pics are the veggies before and after they have been baked.

Put the roasted veggies in a big pot–I used my cast iron dutch oven.  Add the three cups of chicken broth, the water, and the herbs.  Salt and pepper to taste. Bring to a boil, then drop the temp to a simmer.  Let it simmer for about a half an hour, or until the cauliflower is nice and tender. 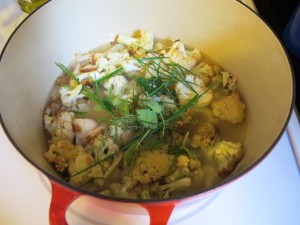 Add the cup of cream and pull off the heat. 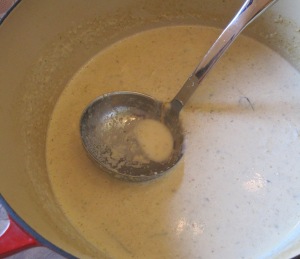