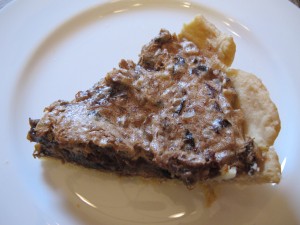 I am starting to see why these weird recipes did not stand the test of time.  For our second instalment of Weird Recipes from Yesteryear, we decided to make a dessert called Prune Whip.  We actually thought it might be good, and I am not really sure why we did.  It wasn’t.  I did like it more than the Tomato Soup Cake, but Anna and Alec thought it was much worse.

I started to think about why these recipes are bad.  I think it boils down to a lack of access to ingredients in the 1940s.  Many of the recipes have prunes, dates, or canned pineapple.  I think you can attribute this to the fact that fresh fruits and veggies were not as readily available in off seasons.  In Minnesota where it is cold most of the time, our fresh fruit season is very short.  Cooks would have had to make the best with dried and canned fruits.

Anna and I did go through the recipes after the prune disaster and found some other recipes that sound good, not just weird.  We hope to give you a recipe worth eating in the next edition of Weird Recipes from Yesteryear.  Until then, here is Prune Whip…

We took about 1 1/2 cups of dried prunes and simmered them in water until they were nice and juicy.  Once they had cooled some we chopped them.  However, they didn’t so much chop as mush up.

Add in the sugar.

Okay, Lucy isn’t really putting in the sugar, but she was pretty interested in what was going on.

Fold in the chopped nuts and prunes.

Once mixed put the mixture in a pie shell that had been pre-baked.  I made a butter pie crust and baked it for 375 for 30 minutes covered with tin foil and pie weights.  This worked well.  I used the pie shell I used in my key lime pie recipe if you are interested, but any pie shell would work. 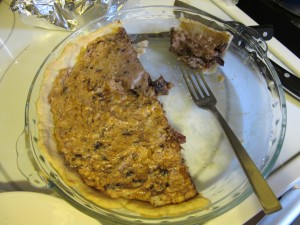 It was not very good.  As you can see from the photo below, none of us finished the dessert.